To share your memory on the wall of Doris Diehl, sign in using one of the following options:

To send flowers to the family or plant a tree in memory of Doris Jean Diehl (Golden), please visit our Heartfelt Sympathies Store.

Receive notifications about information and event scheduling for Doris

We encourage you to share your most beloved memories of Doris here, so that the family and other loved ones can always see it. You can upload cherished photographs, or share your favorite stories, and can even comment on those shared by others.

Posted Sep 22, 2019 at 10:57am
Jackie, Penny, Alf, Bryan and families,
Remembering Doris (adopted Mom) always brings a Smile :-) She was fun, quick witted with a Heart of Gold!!! We had fun visiting with her at Jackie's house at many many Christmas's. The most fun was shopping at Walmart with her and Jackie and family. We will lovingly miss her but Rejoice that she is now in Heaven with Joe (and telling him what to do!) Love to All ---Karen and Phil
Comment Share
Share via: 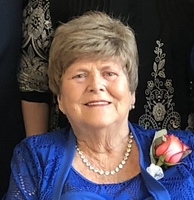