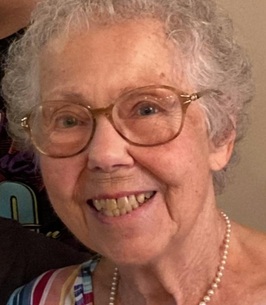 Miriam was a graduate of the Altoona Area High School class of '37, and pursued her knowledge and the love of caring at Bryn Mawr Hospital School of Nursing class of ‘49. She spent her working career at J.C. Blair Huntingdon as Operating Room Supervisor, and at Tyrone Hospital, where she retired in 1994 as an O.R. nurse.

Miriam has always been active. In her youth she earned her flight wings. Upon moving to Tyrone, she joined Wesley UM church where she served on both the Board of Trustees and Pastor Parish Relations Committee. She was a Cub Scout Den Mother, a long time member of the Order of the Eastern Star #280, and also served as both a Candy Striper Instructor and Prenatal Class Instructor at the Tyrone Hospital. More recently she enjoyed participating in Red Hat Society, Questers, book club and bible study. She also was an exercise leader for the Silver Sneakers “Peppy” group at the Northern Blair Senior Center. Miriam had a sweet tooth - her favorite place to visit was Gardner's Candy Store and Ice Cream Shop. She loved reading and gardening, and was quite often heard saying, “It’s one day closer to spring!”. She adored her her loving family, her church, the Tyrone community, and her wonderful neighbors.

Share your stories and happy thoughts of Miriam during the viewing to be held at the Wesley UM Church on Thursday, January 27, 2022 from 12pm to 1pm. A funeral service will follow at 1pm with Pastor Tina Hawkins. Interment will be private. Visitors to the viewing and service are requested by the family to wear a protective mask for the protection of all participants and attendees.

In lieu of flowers, contributions may be made in her memory to the Wesley UM Church of Tyrone.