To share your memory on the wall of George Stever, sign in using one of the following options:

He graduated from Tyrone High School in 1947 and attended Juniata College. He served in the U.S. Army for two years during the Korean Conflict, stationed in Germany. George retired in 1991 as Vice President of Keystone Financial Services (First Blair County National Bank) after 31 years of service. He was a graduate of the Stonier School of Banking of Rutgers University, a member of the Blair County Bankers, Past-President of the Juniata Chapter of NABAC, the Blair County Chairman of PABAC, and he was a member of the Ambassadors Club. Prior to working at the bank he was employed by the Beneficial Finance Company.

George was an active member of The Wesley United Methodist Church where he served as a member and Past Chairman of the Administrative Board; Superintendent of the Sunday Schools; Treasurer of the Building Fund; Chairman of the Pastor-Parish Committee, Finance Committee, Trustee’s Committee; and served as a Lay Leader.

In addition to being a four-year varsity letterman in wrestling for TAHS, he was a dedicated fan of Tyrone sports, never missing a home football game, basketball game, or wrestling match. He was a member of the American Legion, Anderson-Denny VFW, Blazing Arrow and Hook & Ladder Company, and the Tyrone Elks, Lodge #212.

Friends will be received on Tuesday, February 5, 2019 from 5 - 8 pm at Richard H. Searer Funeral Home, Inc. as well as on Wednesday February 6, 2019 at the Church of The Good Shepard from 10 AM until the 11 AM service at the church with Pastor Tina Hawkins officiating. Interment with military honors to follow at Oak Grove Cemetery. Arrangements are under the care of Richard H. Searer Funeral Home, Inc.

The family sends a special thank you to the wonderful and dedicated Carmelite Sisters, nurses, nursing assistants, and staff at Garvey Manor for their unwavering commitment to the care and well-being of their residents.

In lieu of flowers, memorial contributions in George’s name can be made to Garvey Manor, 1037 So. Logan Blvd, Hollidaysburg, PA 16648.

To send flowers to the family or plant a tree in memory of George R. Stever, please visit our Heartfelt Sympathies Store.

Receive notifications about information and event scheduling for George

We encourage you to share your most beloved memories of George here, so that the family and other loved ones can always see it. You can upload cherished photographs, or share your favorite stories, and can even comment on those shared by others.

The Doyals -Jerry, Mark, Juliet and Molly and Love Steve and Kim Jordan sent flowers to the family of George R. Stever.
Show you care by sending flowers 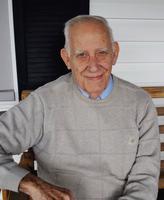